The main objective of our research was to determine whether enhancing women’s appearance, through the use of hair extensions, might have a positive effect on their yearly income. Two out of three groups, consisting of 55 members each, applied hair extensions and wore them for 4 years. Our findings were that women who work in certain sectors received a significant boost to their income. Mainly catering and administrative assistance.

We have therefore concluded that in occupations where a woman’s appearance might play an important role, the use of hair extensions, to enhance their looks, may have a positive effect on women’s earnings.

As the gender pay gap in the United States remains a key issue in the equal opportunities debate [1,2], we have pursued a line of inquiry that suggests that factors other than education, age, or skin color, may have an impact on women’s yearly income and employment opportunities such as a woman’s appearance. The focus of this paper is on the length of women’s hair through the application of hair extensions, as research has shown that women with medium or long hair are deemed more attractive than others [3].

The term ‘earnings’ is used in this paper, as opposed to ‘income’, to refer to the revenue that women in the selected fields of occupation obtain. Either through their basic salaries or tips.

The term ‘hair extensions’ is used referring specifically to AiryHair types of hair extensions, which can be found in Appendix 1.

The term ‘perceived level of happiness’ is used as a subjective indicator referring to the rating that each participant gives as they see fit on a given rating scale.

During the second half of 2011, a total of 1567 women were interviewed. They were the habitual clients of beauty parlors. Then we have grouped the beauty parlor clients by:

Of the 1567 women surveyed, we selected those who were in permanent employment; those who were from similar ethnic backgrounds; and those who belonged to the same age group (24-27 years old).

Following the selection process, the sample group of participants was 165 women. This group was divided into three groups of equal numbers: 55 in each group. The focus was to create identical groups (in terms of age as well as ethnic background) and have the same or a similar percentage of women in similar occupations with similar wages for each group.

The make-up of the three groups were as follows: 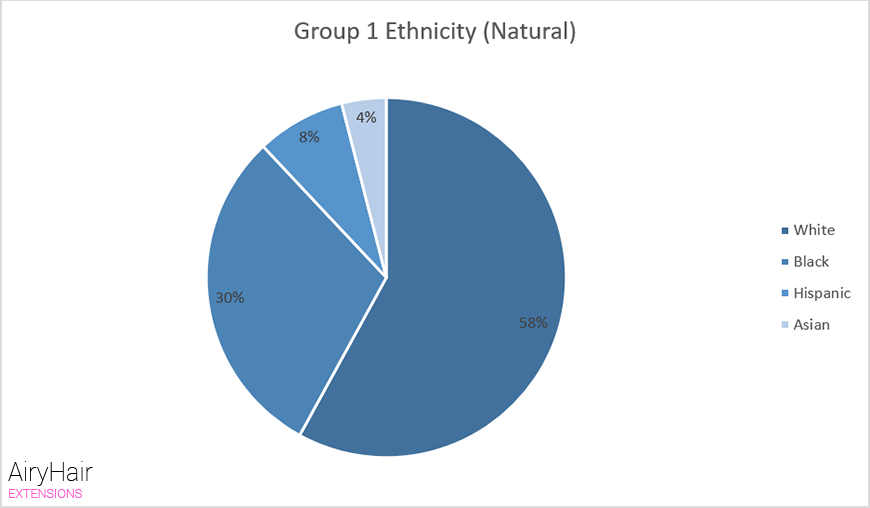 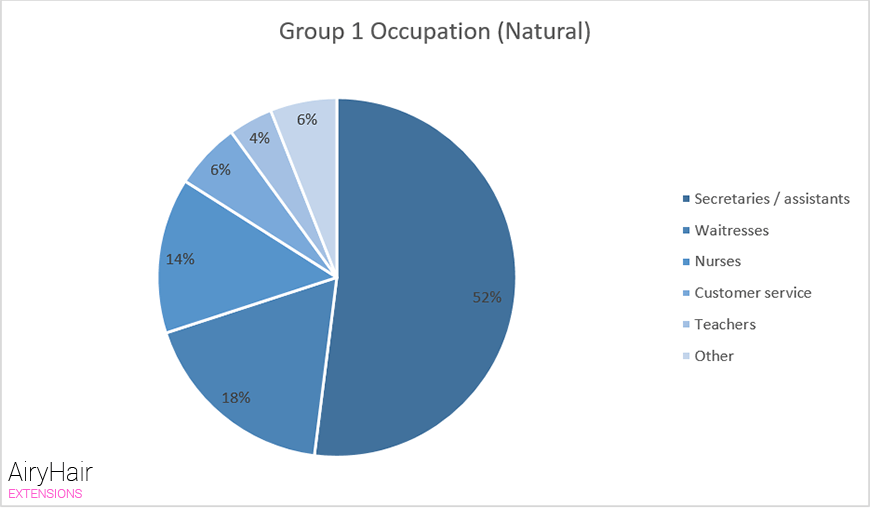 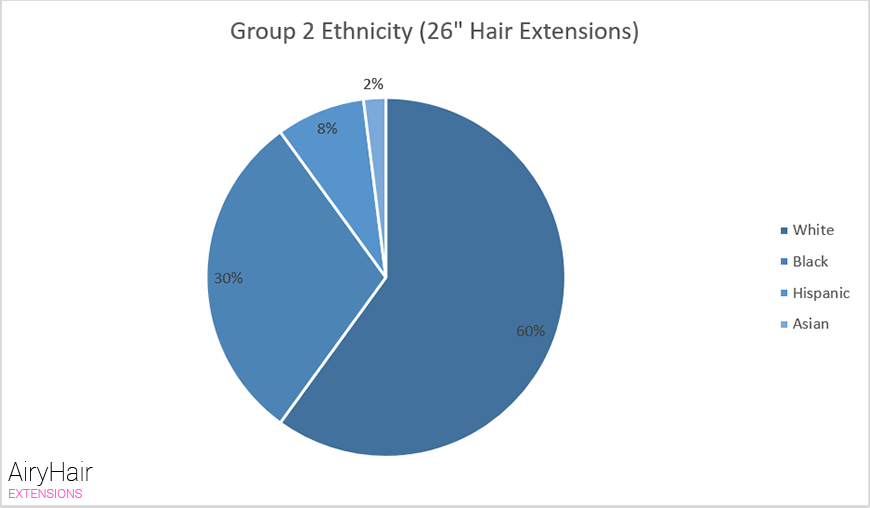 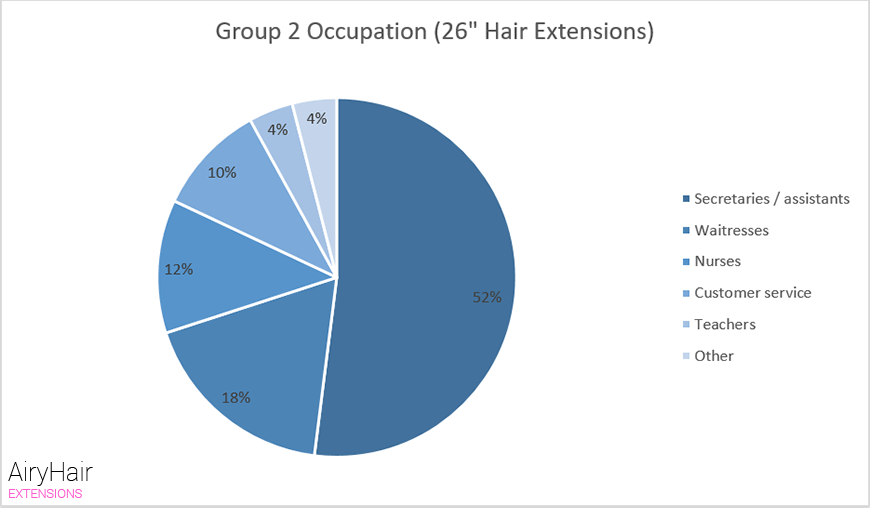 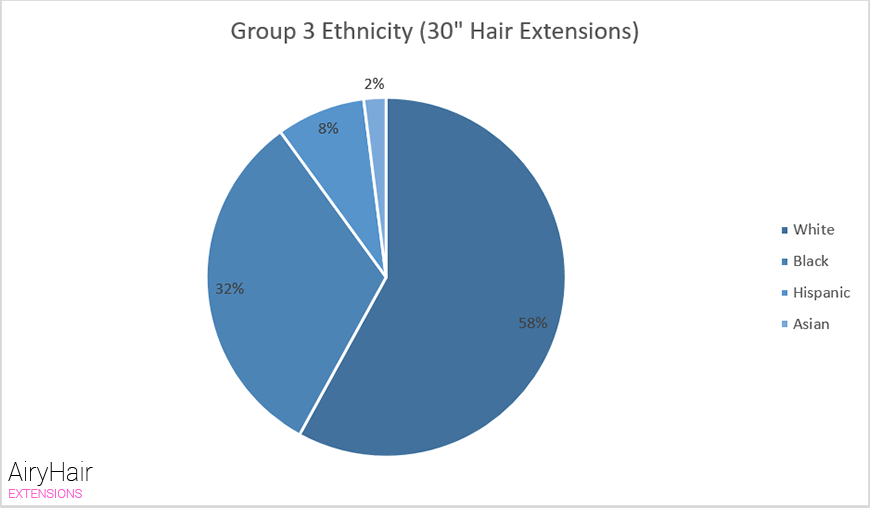 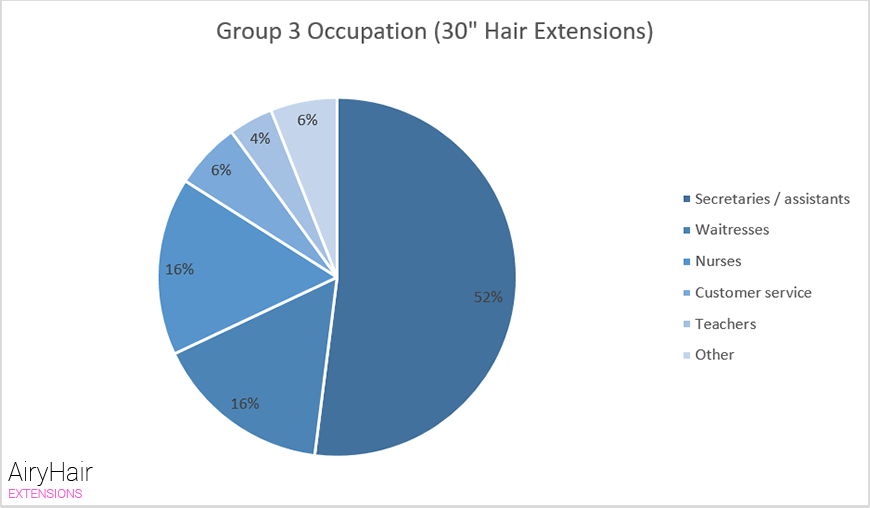 From the beginning of the assignment, Group #2 and Group #3 received, respectively, 26” and 30” hair extensions. We have sent new supplies to each participant every quarter. This was done in order not to compromise the participants’ appearance for the project. Our instructions prohibited Group #1 to use any wigs and/or similar hair enhancing products.

Besides, participants had to rate their levels of happiness before and after the application of hair extensions. This was done on a scale from 1 to 100 and continued to do so annually. 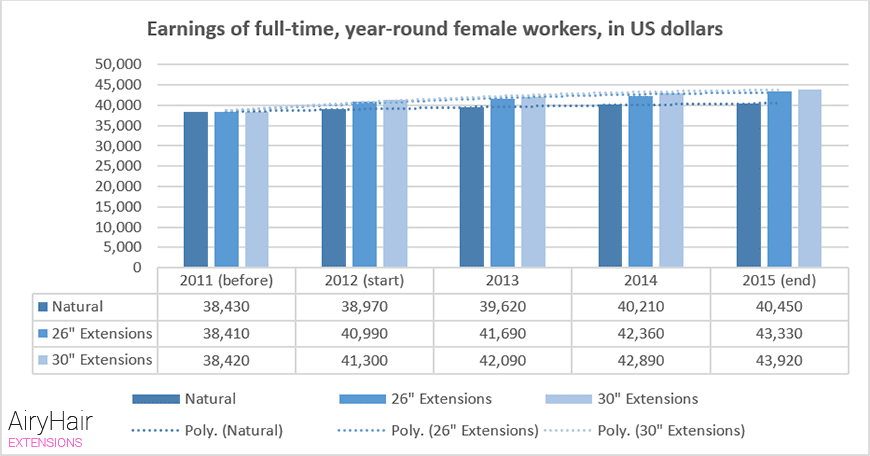 This table demonstrates that the combined yearly earnings of participants increased by 13.5% throughout the research. 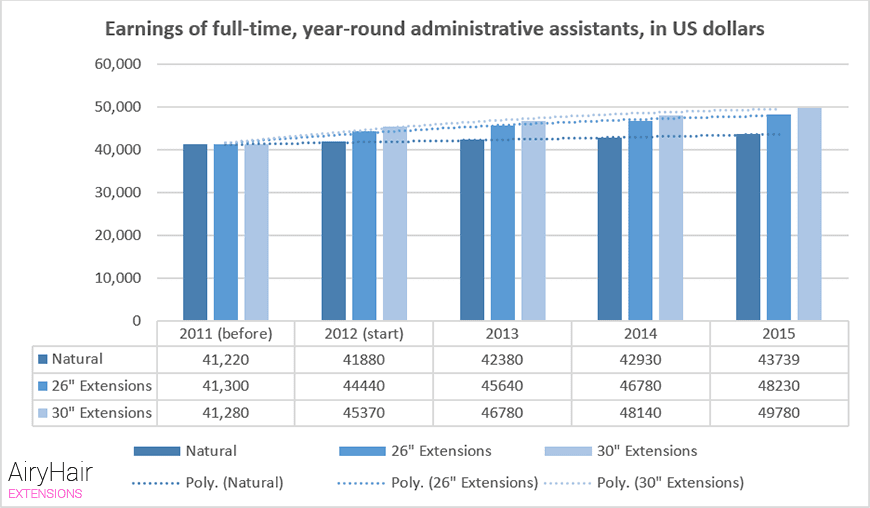 In this table, we can see very clearly that participants’ yearly earnings increased in proportion with the length of their hair or hair extensions. One interpretation of this data could be that the level of customer satisfaction and/or employer appreciation, is directly correlated with the female administrative assistants’ hair length. 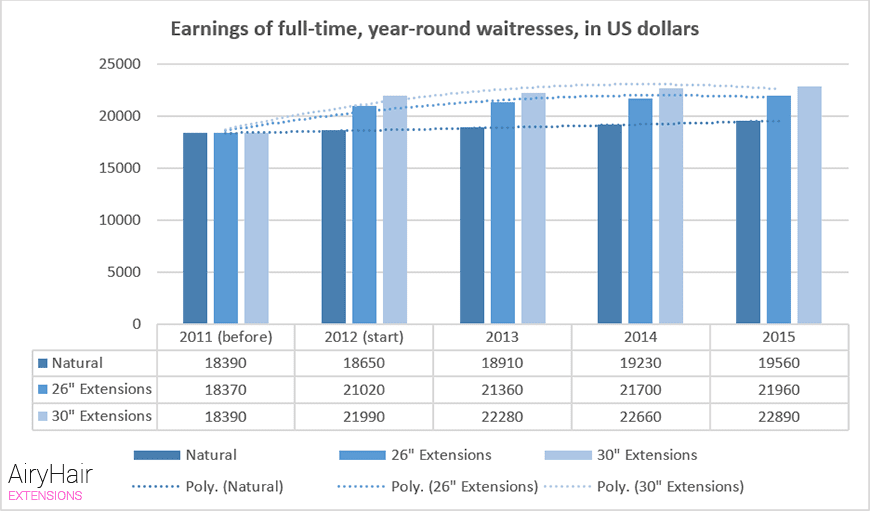 In this table, we can see very clearly that participants’ yearly earnings increased in proportion with the length of their hair or hair extensions. One interpretation of this data could be that the level of customer satisfaction and/or employer appreciation, is directly correlated with the female waitress’s hair length. 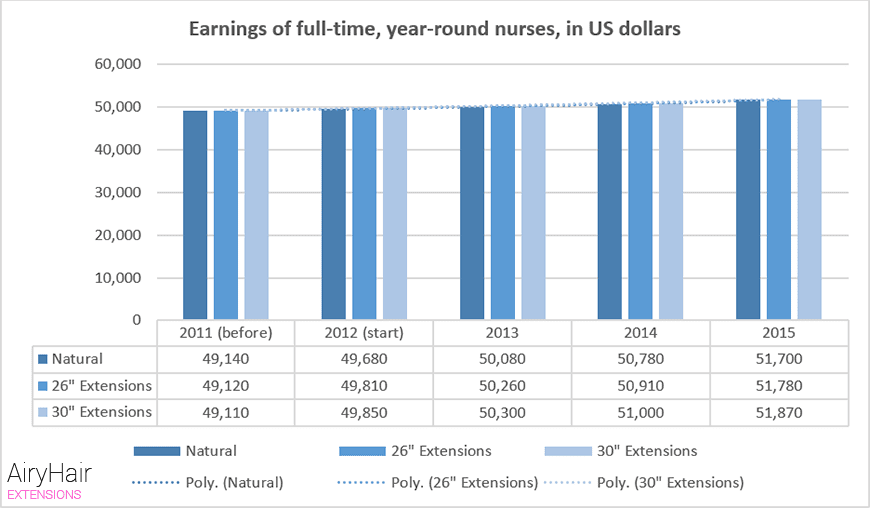 For our participants who worked as nurses, the application of hair extensions cannot be tied to their slight increase in yearly earnings. One interpretation of this table could be that hair length for female nurses has little or no effect on the level of appreciation of their employer or satisfaction of their client. 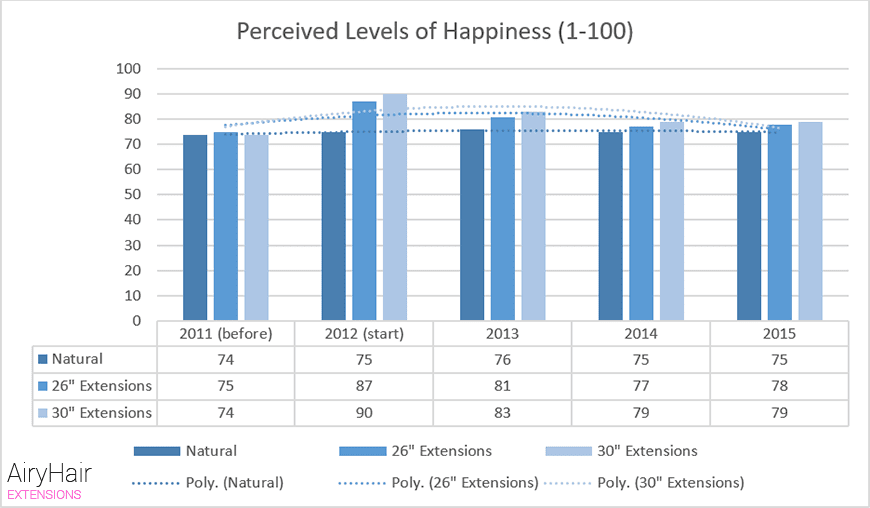 In the following years, the perceived levels of happiness decreased among Groups #2 and #3. The result is a small increase from the beginning of the project to its completion.

We may draw several conclusions from this research.

First, we can conclude that the premise that women with long hair are more appreciated than women with shorter hair is validated by this study. Albeit predominantly among women working in catering or administrative assistance.

Second, we can conclude that employer appreciation and/or customer satisfaction, and therefore earnings, also increase with hair length. This leads us to believe that employers and customers greatly appreciate women with very long hair. At least compared to medium-length hair.

Third, we could conclude that the catering and administrative sectors are biased towards women with greater physical features. Therefore, they reward employees with more socially acclaimed features, such as long hair, with higher salaries.

Fourth, a psychological reality regarding the client and/or employer’s mindset is brought to the fore, as they may no longer be rationally assessing the professional abilities of their waitress or administrative assistant. One might say that their evolutionary instinct dominates their logical mind, and therefore they reward perceived beauty with financial remuneration. This was specifically noticed with the waitresses as their tips increased drastically. Increasing their overall income by 15-20%.

Finally, there is a peak in perceived levels of happiness in the first year. This was following the application of hair extensions and should not be overlooked. Women’s levels of happiness did increase as a result of higher appreciation from employers and/or customers. Which resulted in higher earnings and increased self-confidence! That may, in turn, have produced greater motivation in their workplace and drive contributing to the overall growth in earnings.

For occupations other than waitresses and administrative assistants, the effect was too insignificant to draw any conclusions.

In conclusion, as a consequence of the results of this research, women in the catering or administrative sectors may be interested in reducing the gender pay gap they are victims of by taking steps towards enhancing their features, with the application of hair extensions. This may not, however, address the deeply ingrained gender stereotyping that women who work in those sectors suffer from daily. 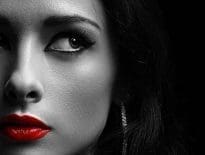 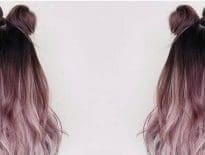