The evolution of a hairstyle.

Every decade has its unique looks and style. Fashion and beauty trends change all the time and they just keep evolving. And hair is one part of fashion that can define a decade. We’re going to go through all 10 decades of the 20th century and see how hairstyles changed through the years.

During this time, permanent hair curling was invented so that had a big influence on the 1900’s hairstyles. Both long and short hairstyles were popular, with longer hair usually being partly pinned up and the rest of it flowing down in curls.

These looks won’t fly in the 2010s, but that’s how it all began! At least as far as photos go.

Curls and ringlets were in style, made popular by Mary Pickford and Lillian Gish. Bows, pins, headbands, and different types of hats were extremely cool as accessories.

The picture with a cat looks cute and if you ignore messy hair strands, it passes the test of time.

This was a decade for bobbed hair. The long hair came off and styles were short or pulled back with ringlets on the forehead and ears. The girls looked very sleek, cool, and confident. Many of the Hollywood movies of that era made this look even more popular.

In this decade, for women’s fashion, the long sleek appearance was most desirable, and the hair was waved and shoulder-length. Jean Harlow was one of the most popular actresses and sex symbols and her platinum blond waves and curls were extremely popular.

Still black and white pictures, but we’re reaching the point where you can hardly tell the decade. 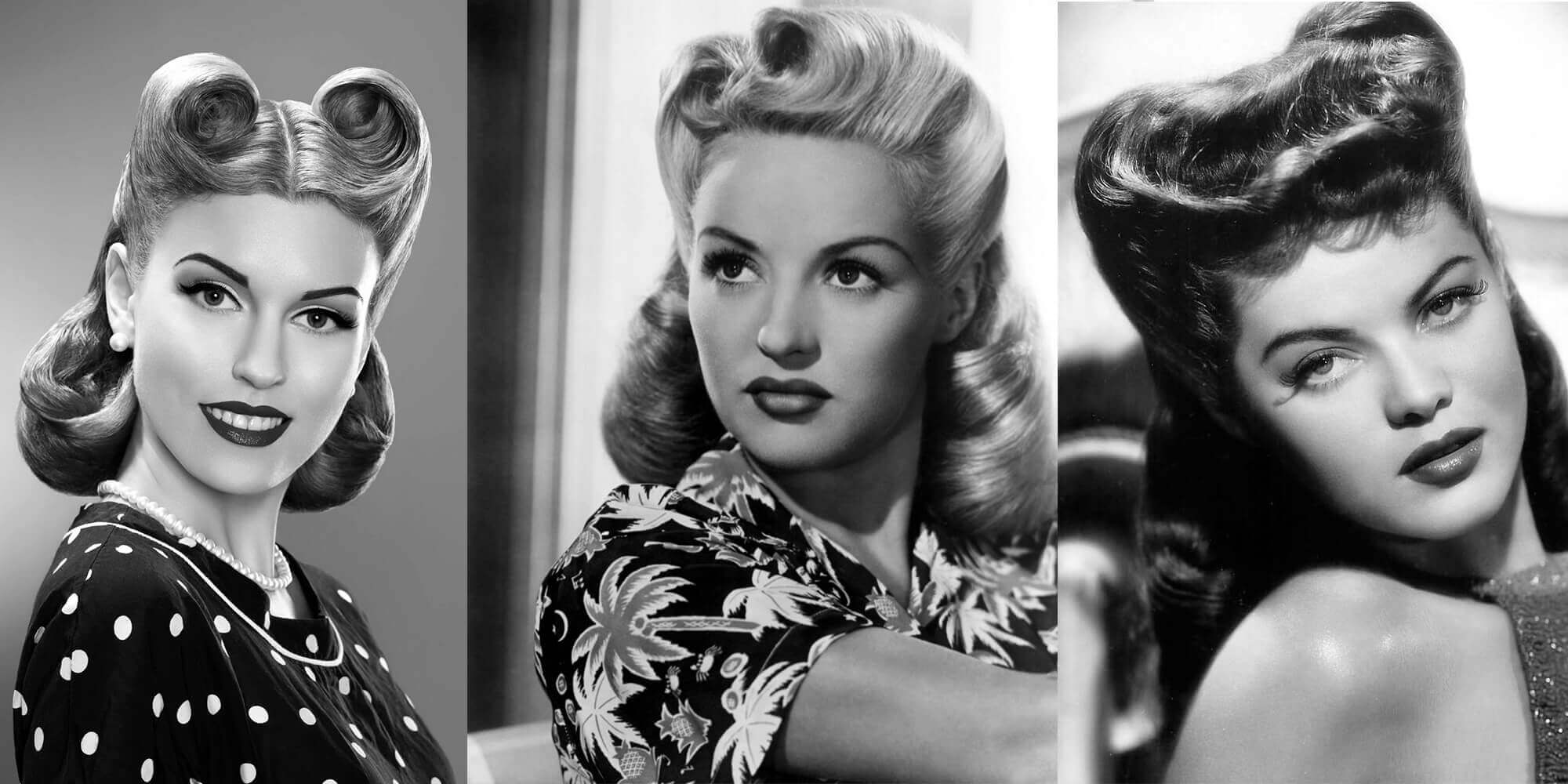 Victory rolls were very fashionable in the 40s as well as barrel curls. The hair was longer, and the ladies looked sexy but sophisticated and elegant. This is also when the pinup style started to evolve, and we can see these hairstyles today as well on pinup-loving girls.

Honestly, we’re not sure what had happened in the 1940s as there’s no way this style can ever come back. It’s plain bizarre.

Young women in the 50s had almost no desire for the long, flowing hair. Hairstyles were short, soft, and neat, and almost always curled. A huge amount of effort was used in styling their hair. One of the most famous hairstyles was the petal coif and the pixie hairstyle.

The boyish looks were a thing and it’s mostly due to the World War and other nasty periods. Women desired independence and feministic looks got pushed too.

The 60s are when the hairstyles started to get bigger and more extravagant, except maybe for the boyish short hair made popular by Twiggy. Bouffants, beehives, and teased hair were extremely popular.

It’s funny how last decade it was all about short hair and then it went backward!

The 70s hairstyles were born out of the hippie movement and leaned towards the natural look. Hair was long, frequently big, and luxurious and the messy look was often acceptable. Headbands were often used as an accessory.

Remember these shampoo commercials and long hairstyles? Yep, that’s the decade where it all began.

Hairstyles were generally big, sprayed, teased, and voluminous and fringes were thick and puffy. Young girls and teenagers loved the side-pony look and if your hair was short, it was either fluffy and permed or gelled and spiky. The 80s also saw the rise of the mullet, which gladly didn’t stick for long.

Do you remember your favorite childhood star with this hairstyle?

90s hairstyles in general were much simpler and more natural and far less likely to cause future embarrassment than those of the previous decade. Of course, the most famous hairstyle of the 90s was the Rachel cut and everybody wanted to copy it.

What about the decade of the 2000s and beyond? This is where it goes from pure hairspray modeling to ombres, sombres, balayage dyes, and more. Famous women started experimenting, paparazzi took pictures and the rest is history. Every other female reading these beauty magazines to clone the looks.

The trend of hair extensions also got extremely popular in this decade and continues to this day through the 2010s and 2020s.

Getting bored of multiple layers of color, celebrities went wild with hair extensions. Pretty much every female rocked healthy-looking hair of lengths never seen before.

We went from crazy looks, hair rollers, and sprays to casual yet elegant. The decade of clean and simple hairstyles if you could call it like that. Bangs were also a thing for a few years.

Any idea what will the 2020s bring to the table? So far, we’re just a year in and there are no distinctive or crazy trends.

How to Dye Synthetic Hair Extensions or Wigs? (2021)

How to Dye Synthetic Hair Extensions or Wigs? (2021)